Quicksand, by Nella Larsen In Other Words, by Jhumpa Lahiri

The Way Around, by David Good 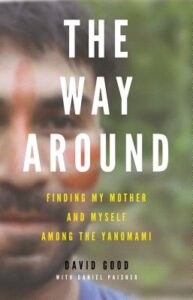 I first “met” David Good about two decades ago through his father’s book, Into The Heart: One Man’s Pursuit of Love and Knowledge Among the Yanomami

. David is the son of anthropologist Kenneth Good, who married Yarima, from a Yanomami tribe, and brought her to live with him in New Jersey. They had three children (David is the oldest) before Yarima decided she could no longer live cut off from her own people, and decided to return to her tribe in the rainforest of Venezuela. David was only five years old when his mother left.

I read Into The Heart

multiple times, and pored over the pictures: Yarima in the rainforest, almost naked, face painted and decorated with sticks; Yarima in New Jersey, wearing Western clothes, her hair permed; Kenneth Good in the jungle, a huge, hairy white man in his underwear, among the compact, tan Yanomami; Kenneth Good, college professor in New Jersey, hanging out with his cross-cultural family. I was fascinated by the story of two people from very different backgrounds learning about and reacting to each other’s worlds, and trying to create a life together. I also wondered how the children would fare. Now, with David Good’s book (The Way Around: Finding My Mother and Myself Among the Yanomami

) I finally have an answer.

Once Yarima decided to stay in the rainforest, her American family had no contact with her. David was devastated, but tried to hide his pain as he was growing up in New Jersey and Pennsylvania. He even began telling people that his mother was dead. He longed to be a “typical” American boy, and was terrified of people finding out the truth: that his mother lived in a jungle and ate tarantulas. To numb his feelings, he drank heavily in high school. Finally, in college, he began to come to terms with his heritage and, once he graduated, decided to make a trip to the Amazon jungle to find his mother.

David finds not only his mother, but also his half-brother and many uncles, aunts, nieces and nephews. During his months in the jungle, he learns to fish, clear land, and shoot with a bow and arrow. He begins to re-learn the language. Despite the difficulties of living in the jungle (lots of bugs, flash storms, and unexpected injuries), he finds a feeling of deep peace and belonging.

Parts of this book are funny. When David arrived in his mother’s village, almost the first thing she did (after crying for joy) was to present him with two “wives”. These young women were already married to other men, but that was no barrier. The women tried to persuade him to perform his husbandly duty so he could give his mother a Yanomami grandchild. He tried just as hard to persuade them that, while he enjoyed their company, he wasn’t interested in being their husband.

This unique memoir sheds light in a compelling, poignant way on the underlying humanity we all share. David Good has set up an organization, The Good Project, dedicated to the cultural preservation of the Yanomami people.

One Response to The Way Around, by David Good