Somebody’s Daughter, by Marie Myung-Ok Lee The Way Around, by David Good 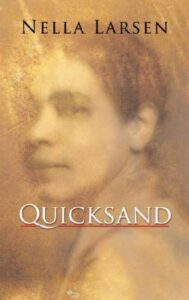 , first published in 1928, is a classic novel of the Harlem Renaissance. When I began to read it, I realized it should also be considered a classic of second generation immigrant literature. Larsen’s white mother was an immigrant from Denmark, and her black father (who disappeared soon after her birth) was probably from the West Indies.

Larsen’s autobiographical novel follows Helga Crane, who was raised by her Danish mother and step-father. We first meet Helga when she is a young woman working at an all-black college in the South. Her mother is dead, and she doesn’t know her father, a black man. She is disgusted with the college’s philosophy of keeping blacks “in their places” and separate from whites.

She finally decides to quit in the middle of the term and to return to Chicago to her mother’s brother, Uncle Peter, who had supported her after her mother’s death. However, when she reaches Uncle Peter’s house, she finds that he has married, and that his wife doesn’t want him to have anything to do with his dusky-skinned niece.

Her search for a place to belong takes her to Harlem, where she finds a job at a black insurance company. While she enjoys the company of blacks, she doesn’t want to shun whites, as many black people made it a point to do.

An inheritance from Uncle Peter gives her the money to travel to Denmark to stay with her mother’s sister. She is greatly admired in Copenhagen, but realizes that she is seen as an exotic being more than as a fellow human. Spurning the advances of a famous artist who paints her and then wishes to marry her, she realizes she misses black life and culture, and ends up back in Harlem.

“How absurd she had been to think that another country, other people, could liberate her from the ties which bound her forever to these mysterious, these terrible, these fascinating, these lovable, dark hordes,” she thinks to herself upon her return. Yet she also insists that “existence in America, even in Harlem, was for Negroes too cramped, too uncertain, too cruel.” She thinks she cannot stay permanently in Harlem, “nor, she saw now, could she remain away. Leaving, she would have to come back.”

Although the ending of this novel seems hurried and false, the rest of the novel gives us a fascinating portrait of an intelligent, somewhat aloof woman caught between two races and countries, and who longs for a place to call home.