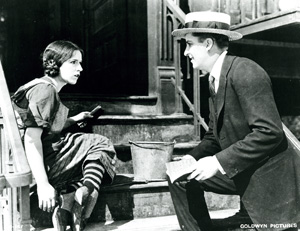 Anzia Yezierska’s story collection Hungry Hearts was made into a silent film in 1922.

Europeans were, of course, the first immigrants to North America. Although they made no attempt to assimilate or even to co-exist with existing North American cultures, some Europeans who were captured as children and then adopted by Native American tribes did live the kind of in-between lives we associate with the second generation. Some of these people wrote about their experiences. One of the most famous of the Indian captivity narratives is the story of Mary Jemison

tells the stories of children of immigrants from Bohemia and Scandinavia.

Many second-generation Europeans managed to assimilate seamlessly into the white, Protestant dominant culture, especially if they didn’t stand out because of ethnicity or religion. However, Catholics and especially Jews, even of the second generation, experienced discrimination and conflict.

Larsen, Nella (1891-1964) — Larsen was born in Chicago. Her mother was an immigrant from Denmark. Her father was a black man from the West Indies who left the family when Larsen was an infant.

Brandenberg, Aliki Liacouras(born 1929) — Brandenberg was born in New Jersey. Her parents are from Greece.

Hamill, Pete (born 1935) — Hamill was born in Brooklyn, NY. His parents were immigrants from Northern Ireland.

Chiofalo, Rosanna — Chiofalo was born and raised in Queens, NY. Her parents are immigrants from Sicily.

Mangione, Jerre (1909-1998) — Mangione was born and raised in Rochester, NY. His parents were immigrants from Sicily.

Puzo, Mario (1920-1999) — Puzo was born in New York City to parents who were illiterate immigrants from Avellino, Italy. He is best known for his novel The Godfather.

Akhtiorskaya, Yelena (born 1985) — Akhtiorskaya was born in Ukraine, immigrated to the U.S. at the age of 7, and grew up in Brighton Beach, Brooklyn.

Bellow, Saul (1915-2005) — Bellow was born in Quebec. His parents immigrated from Russia. His family moved to Chicago when he was nine. He won the Nobel Prize, the Pulitzer Prize, and was a three-time recipient of the National Book Award.

Hoffman, Eva (born 1945) — Hoffman was born in Poland to parents who had survived the Holocaust. When she was 13, she immigrated to Canada with her family.

Kazin, Alfred (1915-1998) — Kazin was born and raised in Brooklyn, NY. His parents were immigrants from Russia.

Malamud, Bernard (1914-1986) — Malamud was born in Brooklyn, NY. His parents were immigrants from Russia. His novel The Fixer won the National Book Award and the Pulitzer Prize.

Shteyngart, Gary (born 1972) — Shteyngart was born in Leningrad (now St. Petersburg), Russia, and immigrated to the U.S. at the age of seven.

Stern, Elizabeth Gertrude (1889-1954) — Stern was born in Poland and immigrated at the age of three to Pittsburgh, PA.

Yezierska, Anzia (1885?-1970) — Yezierska was born in Poland. Her exact year of birth is not known. She immigrated with her family to New York City as a child. Her first collection of stories was made into a silent film in 1922.