The Way Around, by David Good American Born Chinese, by Gene Luen Yang

In Other Words, by Jhumpa Lahiri 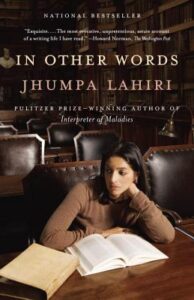 Jhumpa Lahiri, the Pulitzer Prize-winning Indian-American author, has become known for her fiction exploring the Indian immigrant experience in America. In Other Words

is a departure in many ways: it is mostly a book of essays (and two short stories); and Lahiri wrote it in Italian.

This is a short book. The English text (translated by Ann Goldstein) is printed on the right-hand pages, while the original Italian is on the left, which makes the actual text only about 100 pages long. The essays explore Lahiri’s quest to learn Italian, her love of the language and the country, and her decision to write in Italian.

The book reveals Lahiri as an intensely private person who is uncomfortable with the fame that has been thrust upon her. She writes about receiving the Pulitzer Prize for her first published book in English: “I became a writer in English. And then, rather precipitously, I became a famous writer. I received a prize that I was sure I did not deserve, that seemed to me a mistake. Although it was an honor, I remained suspicious of it. . . . But a year after my first book was published I lost my anonymity” (p. 167).

She turns to Italian, in part, in order to regain the freedom of anonymity. After studying the language for 20 years, she and her family move to Rome. She begins to keep a diary in Italian, and then to write the short essays that make up this book. Here is a passage from the essay “The Imperfect”:

As a girl in America, I tried to speak Bengali perfectly, without a foreign accent, to satisfy my parents, and above all to feel that I was completely their daughter. But that was impossible. On the other hand, I wanted to be considered an American, yet, despite the fact that I speak English perfectly, that was impossible, too. I was suspended rather than rooted. . . . Here it Italy, where I’m very comfortable, I feel more imperfect than ever. . . . Why, as an adult, as a writer, am I interested in this new relationship with imperfection? What does it offer to me? I would say a stunning clarity, a more profound self-awareness. Imperfection inspires invention, imagination, creativity. It stimulates. The more I feel imperfect, the more I feel alive. (pp. 111-113).

The two short stories included are unlike any stories I remember reading by her. First of all, they are not specifically about Indian-Americans or India. The characters’ ethnicity is not defined. Second, the stories have a dream-like quality (and one of them is actually about a dream). They have a magical realist flavor although I can’t point to any prominent magical or fantasy elements in them.

The writing in this book is simple and spare, but at the same time deeply felt. It is a raw exploration of the struggle to express oneself honestly and the freedom to create, unconstrained by expectations.