The Chosen, by Chaim Potok 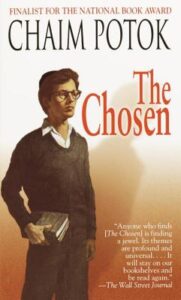 was a huge best-seller when first published in 1967. I’d been meaning to read it for years, and when I finally got to it, I wasn’t disappointed.

Potok’s parents were Hasidic Jews from eastern Europe. Potok was born and raised in New York City, and became an ordained rabbi. According to Potok’s obituary in the New York Times, The Chosen “was the first American novel to make the fervent, insular Hasidic world visible to a wide audience.”

The novel follows the adolescence of two Jewish boys, one who is Hasidic (Danny) and one who is orthodox but not Hasidic (Reuven). They befriend each other after Danny hits Reuven with a baseball during a fiercely played game between their schools. The novel is really about Danny’s painful dilemma of being stuck between two worlds, but it is told through the eyes of Reuven, whose father is more liberal. Danny is expected to follow his father’s footsteps and become the rabbi of his tight-knit Hasidic community, but he secretly reads secular books in the public library and dreams of becoming a psychologist.

The novel manages to be gripping even while including long passages of lecturing. Chapter 6, for example, is basically a 10-page-long lecture by Reuven’s father on the origin of Hasidic Judaism. Nevertheless, I found it interesting, especially because Jewish history and verbal explanations seem an integral part of the culture. Even though I’m not Jewish and have never studied the Talmud (commentary on the Torah), I was fascinated by a dialogue on the Talmud between Danny and his father.

The most touching part of the book is towards the end, when Danny’s father, Reb Saunders, reveals that he has known for some time that his son would leave their community. Reb Saunders’ five-page lecture about his hopes and fears for Danny was so emotionally wrenching that I found myself sobbing, and could hardly see the words on the page.

The story of Danny and Reuven and their fathers opens a window into a way of life that many of us are not familiar with.