The Chosen, by Chaim Potok Quicksand, by Nella Larsen 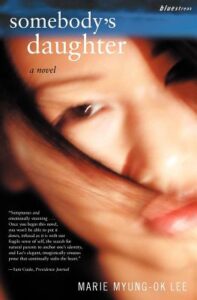 Although Marie Lee is not adopted (she grew up in Minnesota to parents who are immigrants from Korea), she began writing stories about a fictional young woman, Sarah, who was adopted from Korea into a white Minnesota family. These stories eventually became the novel Somebody’s Daughter

. Woven into Sarah’s narrative is the tale of her birth mother, whom Sarah is searching for during a year abroad in Korea.

Sarah is angry at her white parents for trying to avoid any talk of Korea. She refuses to call them “Mom” and “Dad,” instead referring to them by their first names. She drops out of college and decides on a whim to spend a year in Korea, in a program for young people of Korean heritage. I found Sarah to be immature and self-absorbed (an impression which is perhaps heightened because her sections are told in first person). Still, I was still interested in her journey to find her roots.

The sections of the novel devoted to Kyung-Sook (Sarah’s birth mother) are told in third person, and take the reader back in time to the Korean War. Lee interviewed Korean birth mothers as part of her research, and from these interviews she creates a sympathetic character in Kyung-Sook, who has to struggle for her every meal.

Sarah attempts to find her birth mother by visiting the orphanage where she was abandoned. There, she finds something shocking about her birth which could explain her parents’ reluctance to bring up the subject of Korea. She also appears on a Korean television show devoted to reuniting family members.

I don’t want to reveal whether or not Sarah connects with Kyung-Sook. The twists and turns of the story are interesting. In the end, Sarah returns to the United States a more mature young woman. And in the end, I learned a little bit about life in Korea.