My Antonia, by Willa Cather 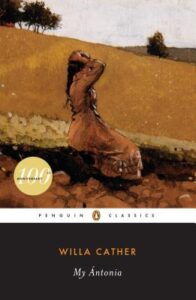 is one of my all-time favorite novels. Although it is not written by a child of immigrants, it is about children of immigrants.

The story is told by a bystander, Jim Burden, just 10 years old when he meets 13-year-old Antonia, traveling with her family from Bohemia to the prairies of Nebraska. As Jim’s grandparents help Antonia’s family get settled, Jim becomes fascinated by the quick, bright, willful Antonia.

In high school, Jim prefers to socialize with the poor immigrant girls from Scandinavia and eastern Europe, rather than with girls of his own social class. He loves the strength and vigor of the immigrant girls, whereas he comments about the local girls that “when one danced with them their bodies never moved inside their clothes; their muscles seemed to ask but one thing–not to be disturbed” (p. 173).

Although Antonia is clearly the heroine, Jim also tells the stories of Lena, a poor, beautiful daughter of Norwegian immigrants who was burdened with helping her parents care for a brood of younger children; Tiny, who escapes farm life to work in a hotel; and the “three Marys,” children of Danish immigrants who work in a laundry.

Jim’s and Antonia’s lives diverge sharply when Jim leaves for college, and Antonia marries a fellow Bohemian and settles down to farm and raise children. But he never forgets her, and comes back to visit her years later.

This novel does not have a definite plot, yet the characters engage the reader so fully that no strong plot is needed. In fact, in the Introduction, Jim describes his story in this way: “I simply wrote down what of herself and myself and other people Antonia’s name recalls to me.”

This is a novel full of beauty and truth.