My Antonia, by Willa Cather Habibi, by Naomi Shihab Nye 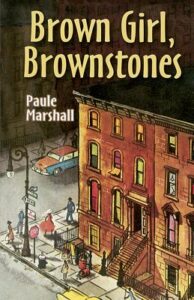 Brown Girl, Brownstones reminds me of Sons and Lovers

by D.H. Lawrence. Both are coming-of-age novels. In both novels, place is important: Lawrence’s rural coal-mining district in England, and Marshall’s Brooklyn, New York are described in intimate detail. Both main characters (Paul Morel and Selina Boyce) favor their opposite-gender parent. In both books, the main characters awaken sexually and search for their place in the world. Both novels are semi-autobiographical and as such tend not to have a strong plot or structure. They both have a stream-of-consciousness feeling. And with both novels, I found myself bogged down in the middle with the plethora of life details.

Selina Boyce is born into a family of immigrants from Barbados, and comes of age during the 1940s. Her mother is determined to make it in their new homeland by saving money to buy their Brooklyn brownstone. Her father dreams of returning to the family land in Barbados. The mother (Selina refers to her as “the mother” rather than “my mother”) succeeds at her single-minded goal, even indirectly causing the death of Selina’s beloved father, but loses her daughter’s love and respect for many years.

The novel is full of the texture of immigrant life in Brooklyn: the physical setting, the people, the cadence of the immigrants’ English. We meet Selina for the first time as she sits on the top-floor stair landing in her Brooklyn brownstone: “Her house was alive to Selina. She sat this summer afternoon on the upper landing on the top floor, listening to its shallow breathing–a ten-year-old girl with scuffed legs and a body as straggly as the clothes she wore. A haze of sunlight seeping down from the skylight through the dust and dimness of the hall caught her wide full mouth, the small but strong nose, the eyes set deep in the darkness of her face” (p. 4).

As she grows up and attends college outside of her neighborhood, Selina becomes aware of how she is viewed by white people of privilege. Although she disdains her mother’s economic ambitions, Selina joins a Barbadian community association with the sole purpose of winning scholarship money to share with her unemployed boyfriend. However, when she is offered the scholarship, she admits her duplicitous behavior, declines the money, breaks up with the boyfriend, and decides to work on a Caribbean cruise ship.

is a rich book, to be savored slowly.