In Other Words, by Jhumpa Lahiri How the Garcia Girls Lost Their Accents, by Julia Alvarez

By Jyotsna_Sreenivasan On July 7, 2016 · Add Comment · In Children's/Young Adult, Fiction 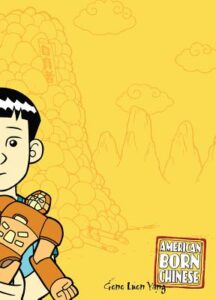 I can’t believe I haven’t written about this amazing graphic novel yet! I’ve read it numerous times, and it was a favorite in my middle-school classroom. Students enjoy it first because it is funny. Then I encourage them to read it again, for the cultural insights, and because it’s full of humor and adventure, even reluctant readers will read it again.

is actually three intertwined stories. The first involves a re-telling of the Chinese legend of the Monkey King, a Kung-Fu superhero. The second is the story of the Chinese-American boy Jin Wang, who is desperate to fit into a new school where he is the only Chinese-American. The third is the story of a “typical” American boy, Danny, who inexplicably has a Chinese cousin, Chin-Kee. When Chin-Kee comes to visit Danny, the cousin exhibits every racist stereotype associated with Chinese-Americans. Even more annoying, Chin-Kee goes everywhere with Danny and drives away his “normal” American friends.

These stories come together in a poignant, effective way in the end. Even as my students laughed at the racist stereotypes in this book, they recognized them as racist, and understood why Yang used them and what he was trying to convey.

In addition to the messages of tolerance and empathy, this graphic novel can also be used to discuss literary devices such as symbolism and foreshadowing. For example, early in the book, when Jin Wang still lives in San Francisco’s Chinatown, he confesses that when he grows up he want to be a transformer, like the toys he plays with. The Chinese herbalist to whom he is speaking tells him that “it’s easy to become anything you wish, as long as you’re willing to forfeit your soul.”

This book can be read on many levels. According to Gene Luen Yang’s web site, American Born Chinese was the first graphic novel to be nominated for the National Book Award.