My Name is Aram by William Saroyan 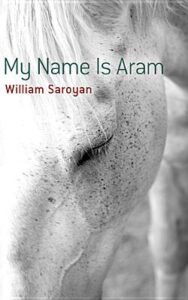 I’ve been aware for years that William Saroyan was a well-known author, but I’d never read any of his work, and until I began putting this web site together I didn’t realize he was second-generation Armenian-American. He lived from 1908 to 1981, and was a prolific writer of short stories, novels, and plays. He was awarded the Pulitzer Prize in 1940 for his play The Time of Your Life

, but he refused to accept it.

(published 1940) because, first of all, it is considered Saroyan’s best work, and second of all, I was captivated from the first line of the first story, “The Summer of the Beautiful White Horse”: “One day back there in the good old days when I was nine and the world was full of every imaginable kind of magnificence, and life was still a delightful and mysterious dream, my cousin Mourad, who was considered crazy by everybody who knew him except me, came to my house at four in the morning and woke me up by tapping on the window of my room.”

Each story features the child Aram as narrator and protagonist. The stories are light and funny for the most part, following Aram as he helps an uncle plant pomegranate trees in the desert, and is bribed into singing in the Presbyterian church (although he is Catholic), and attempts to escape the truant officer in order to hang out at the circus.

These stories don’t dwell on the kind of cultural angst that we might expect from a second-generation writer of today. Instead, details such as the fact that Aram speaks Armenian at home, that he has dusky skin and black hair, and that he and his family are poor, are woven into the stories without a lot of fanfare.

Occasionally a story hints at the sorrows and regrets of the adult world, as in “The Poor and Burning Arab,” about a silent Arab who hangs out at Aram’s house, presumably because he misses his family back home, and Armenians are as close to Arabs as he could find.

I enjoyed every one of the 14 stories in this collection.

One Response to My Name is Aram by William Saroyan