My Heart and Other Black Holes, by Jasmine Warga

By Jyotsna_Sreenivasan On March 25, 2019 · Add Comment · In Children's/Young Adult, Fiction 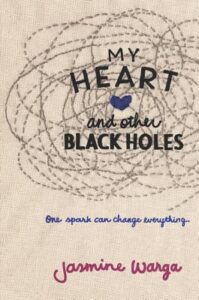 I recently had the pleasure of meeting Jasmine Warga at a conference, and I was eager to check out her young adult novels. My Heart and Other Black Holes

, her first novel, tackles the topic of teen suicide with two well-developed main characters and a gripping story.

The main character, Aysel (pronounced Uh-zell), is of Turkish origin, but she knows very little about that culture. Her parents split up when she was a baby, and her mother has tried hard to assimilate into mainstream American culture. Her father has a mental illness which caused him to commit a horrible crime against an all-American boy.

The novel begins some years after the crime. Because of her unusual last name and her Turkish ethnicity, 16-year-old Aysel believes that everyone in their small Kentucky town associates her with her father’s crime, and that they always will. She also fears that her father’s mental illness and criminal past may resurface in herself. Therefore, she has decided to kill herself. She finds a “suicide partner” on a web site, and they plan to act in less than a month, on April 7. The novel is structured as a count-down to this day, which effectively ratchets up the tension.

As she and Roman (her suicide partner) discuss the reasons for their decision, they become closer. But will their friendship be enough to save them? Read this compelling, poignant book to find out. (Hint: the ending is hopeful.)

The story is told in first person present tense, which makes sense since Aysel doesn’t want to think about the past, and believes she has no future. The title of the novel (which I love) refers not only to Aysel’s depression, but also her interest in physics. The book includes resources for young people who are depressed and who might be contemplating suicide.