Battle Hymn of the Tiger Mother, by Amy Chua 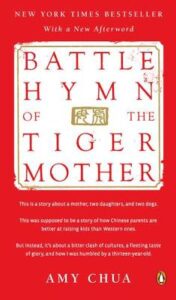 I was curious to read Battle Hymn of the Tiger Mother

because of all the media attention it has received. Chua argues that Chinese mothers (and Asian mothers in general) manage to raise successful children by being very strict and demanding. Chua would not allow her two daughters to have play dates or sleepovers, or choose their own after-school activities. She even rejected shoddy handmade birthday cards.

I wondered if I would I find Chua’s method of child-rearing as outrageous and distasteful as it seemed from the articles I’d read, or if the book would prove to be more nuanced and culturally enlightening.

Chua acknowledges that she wants the best of both worlds for her children: she wants them to be successful academically, AND to have hobbies. But her approach to hobbies was to choose her children’s musical instrument (either piano or violin) and to insist they practice for hours each day.

The book turned out to be more about Chua and her family, than about Asian parenting. Even Chua’s parents felt she was going too far at times — for example, when she insisted that her children practice their instruments for hours even when they were on vacation.

As it turns out, Chua did back down with her second daughter and allowed her to start playing tennis (the daughter’s choice) instead of putting so many hours into music. And while writing this memoir, Chua says she had her children and husband read and comment on everything.

Her daughters have become very successful academically and musically. Still, I wondered whether the children had felt abused, or whether they thought their mother was crazy. As far as I can tell (from doing a quick web search), the daughters have a good relationship with their mother. Sophia, the older daughter (now at Harvard), has her own blog.

Chua’s book raises some interesting points about how strict a parent should be. I was raised by parents from India, and they certainly expected good grades and respect for elders. I, in turn, watch my sons’ grades carefully and honestly I am not happy with a B+.

Still, I do believe that all children come to earth with their own gifts and their own path in life, and my goal is to help my kids find their own path–not to choose something for them. By force-feeding her children her own agenda, I fear that Chua may have prevented them from finding their own true path. Yet she also has a good point that, without a strong work ethic, a child may not be able to succeed at anything, even if they do find their passion.